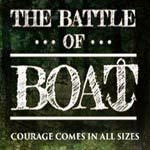 Get your license from Theatrical Rights 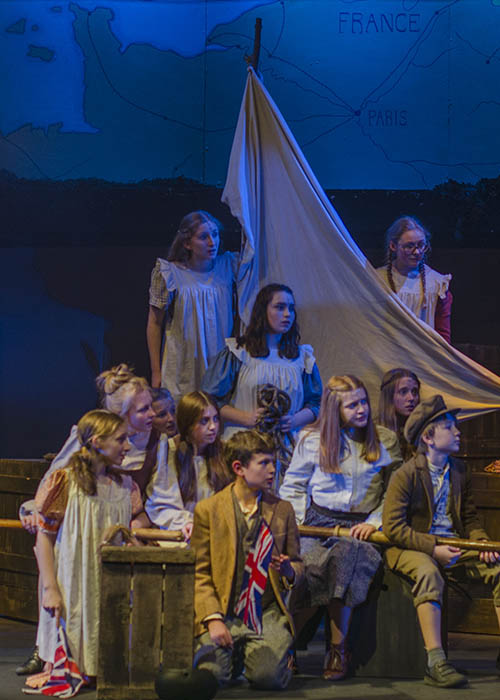 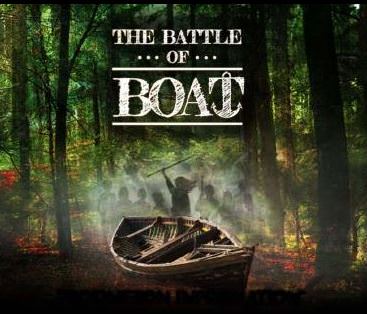 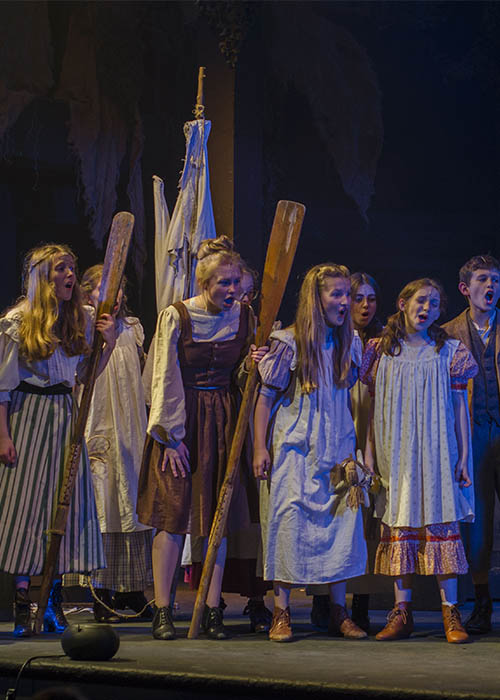 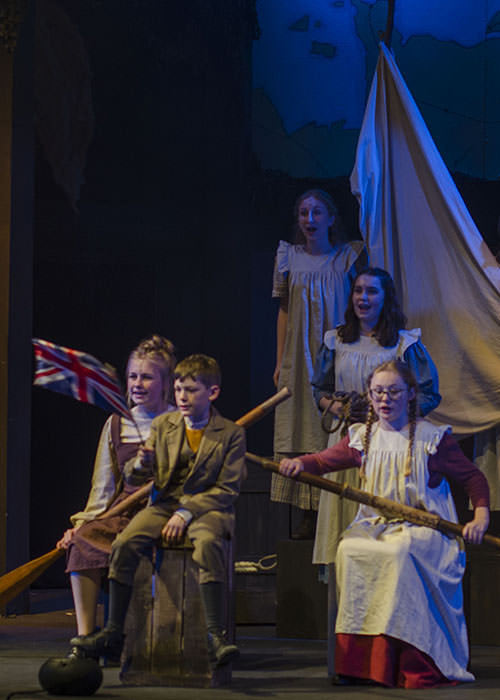 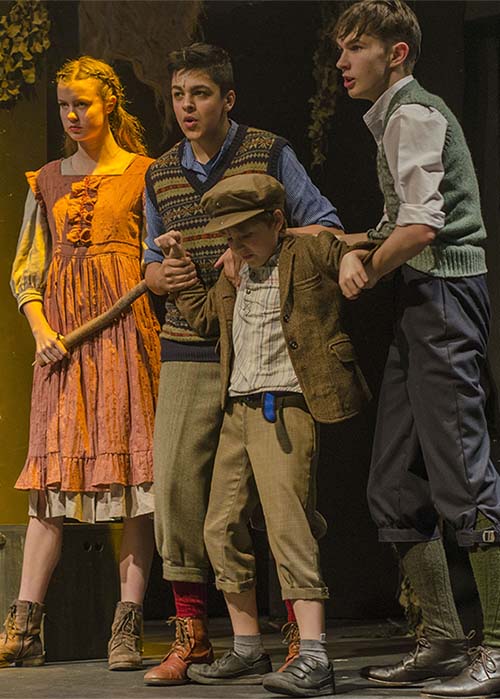 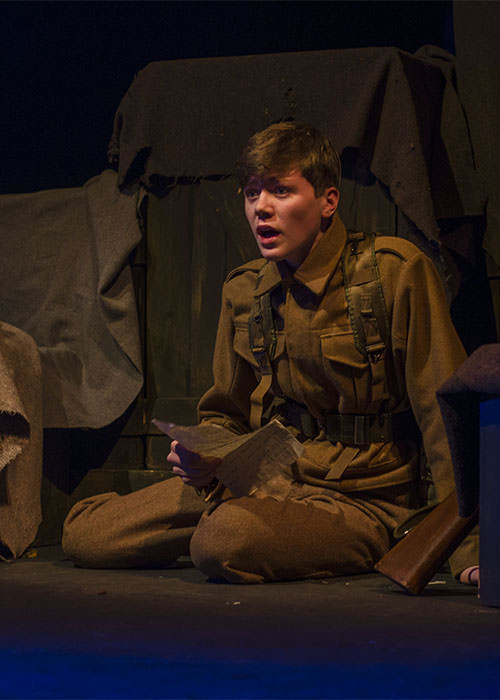 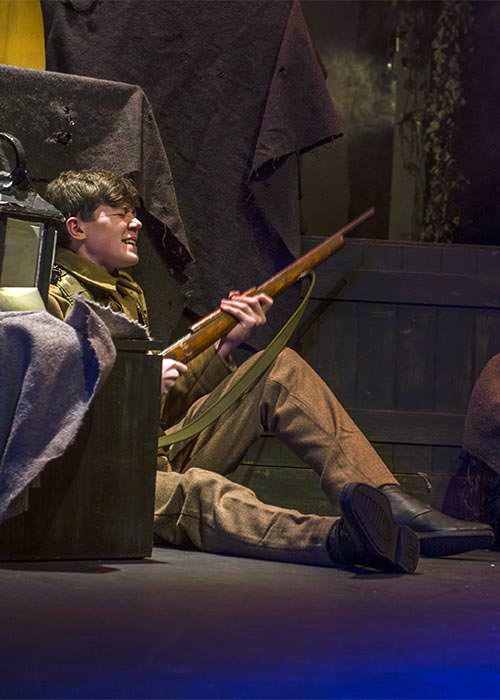 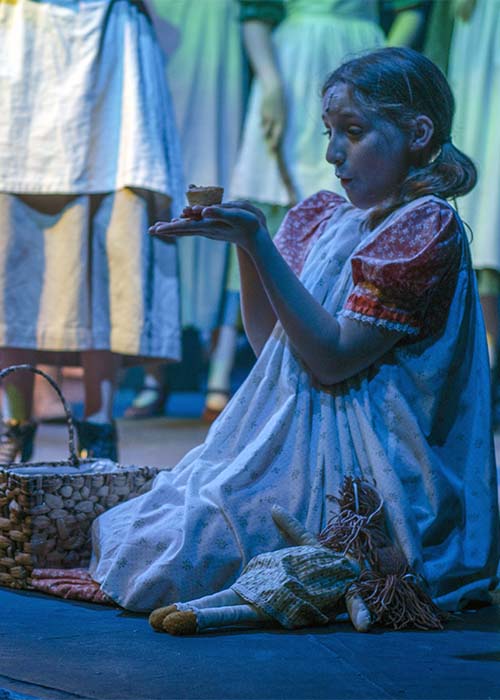 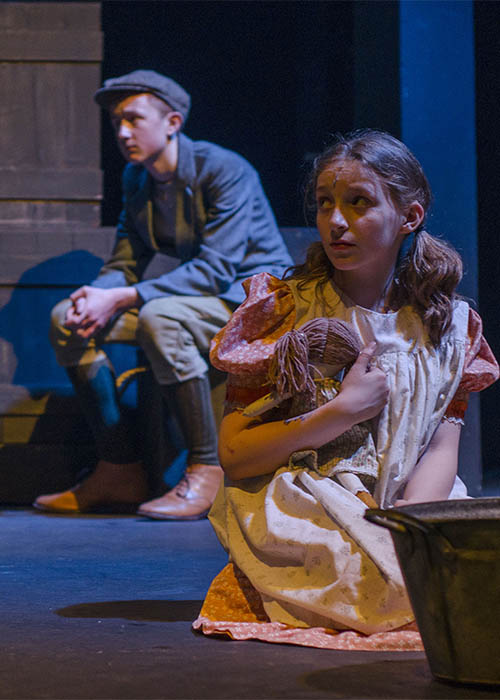 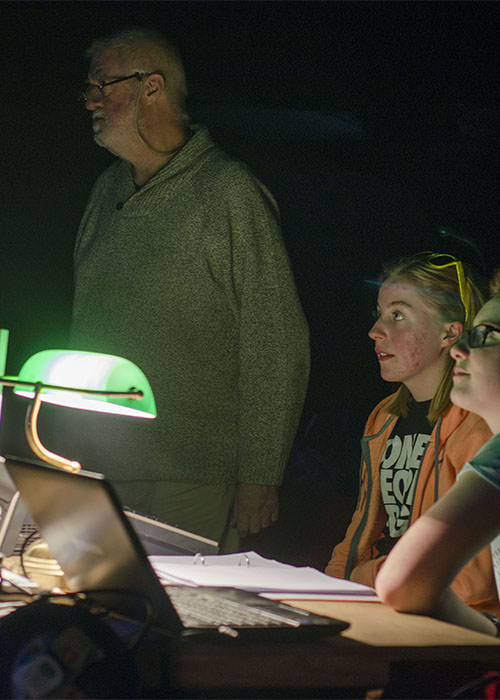 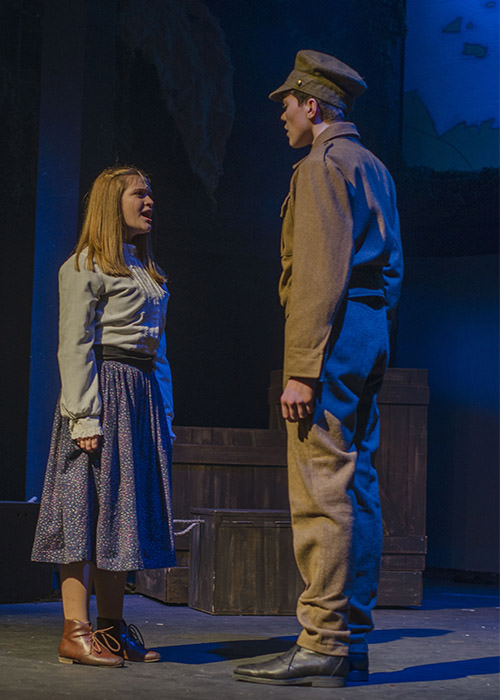 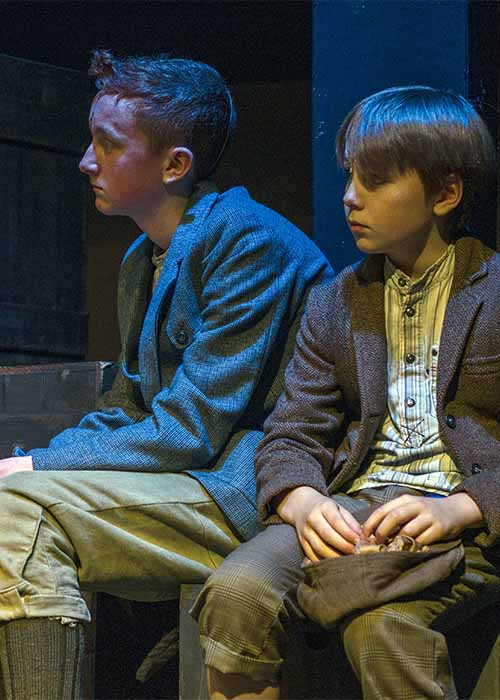 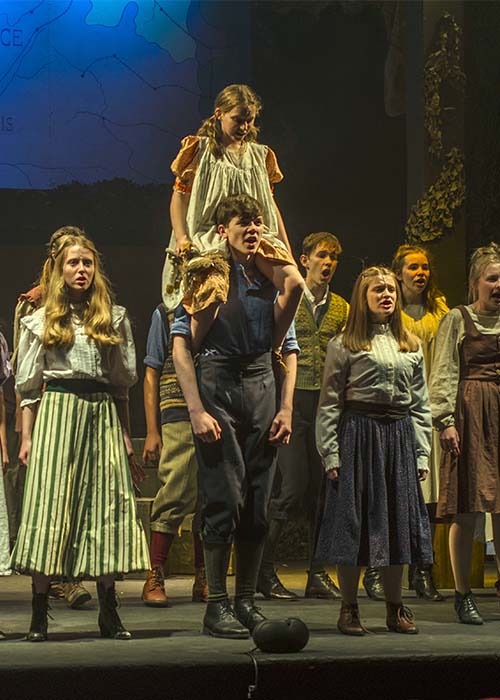 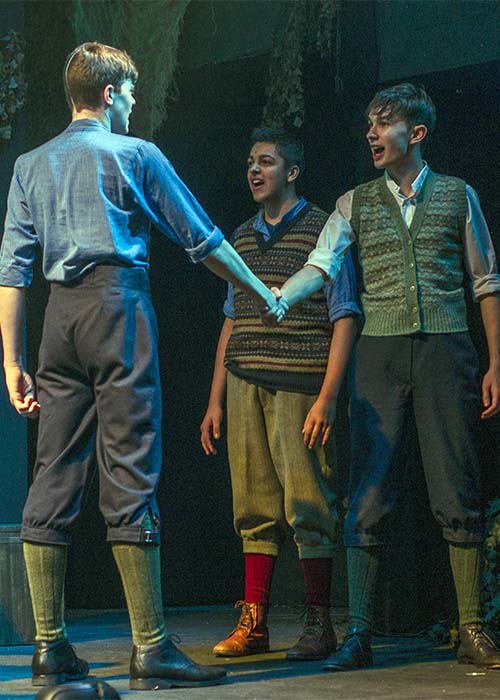 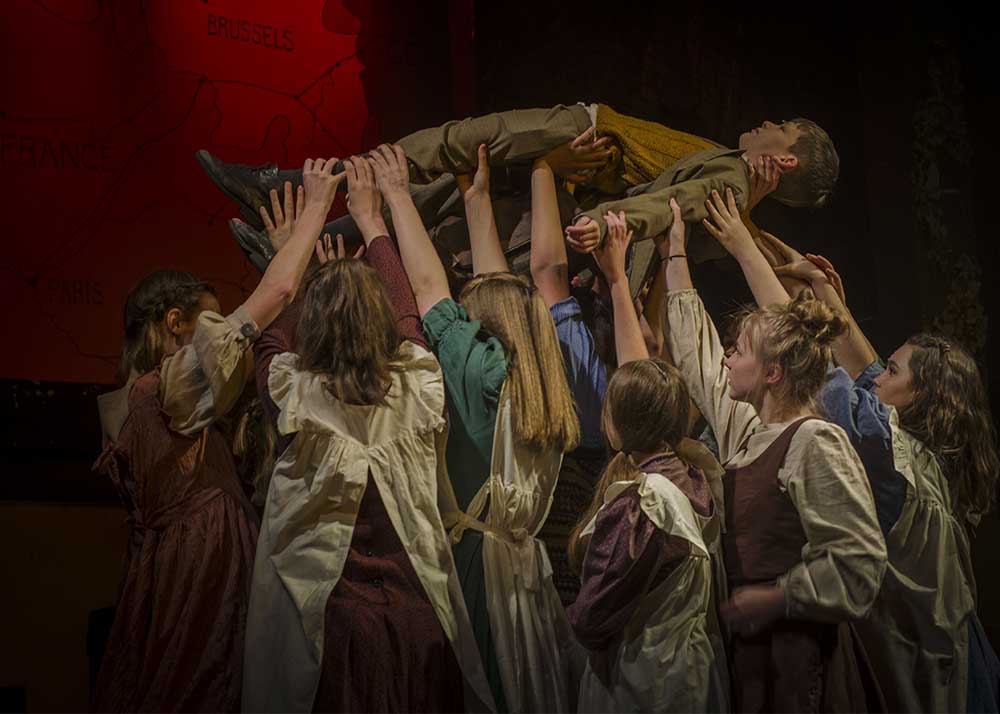 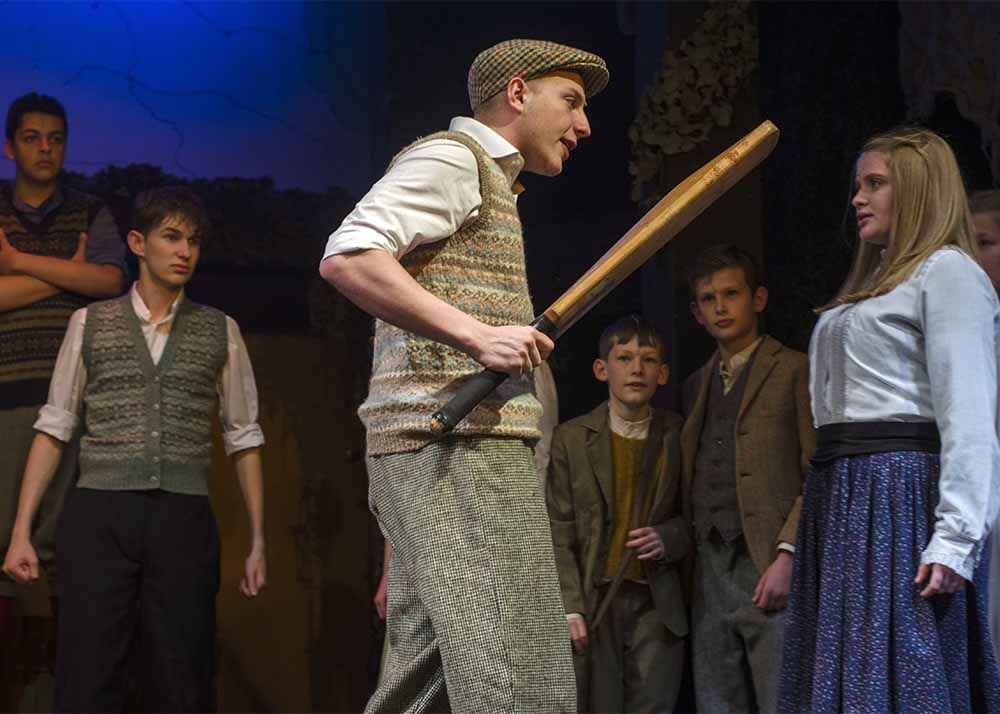 Photos for Battle of Boat: Credit 'Taryn Everdeen' Many thanks for the great images.

You can be sure when hiring from Thespis Theatrical Costumiers that you will look truly amazing in any of the Battle of Boat costumes from our collection, where our attention to detail, quality and cleanliness is second to none.

Set in a seaside town on the English south coast in 1916. The carefree happiness of a group of young children is short-lived as they find themselves discovering more and more about the First World War that is unfolding around them. Their initial response, to join the army, is thwarted as they are inevitably each rejected for being too young. There is one exception however as William, the oldest of the group is enlisted and is sent to fight in France. The tale is of the persistent attempts that the children make to do whatever it takes to help their friend and their country, with weaving, powerful themes of rivalry, leadership and battle. The youthfulness of the cast, and of the nation's young generation lost to the Great War, serve to make the scale and impact of the musical even greater. A real tearjerker.

The Battle Of Boat is an original musical by composer Ethan Lewis Maltby and lyricist Jenna Donnelly. Set during WW1, it follows the adventures of a group of children trying to find their place in a world at war. Heartwarming, funny, emotional and exciting, the musical is performed entirely by children aged 8 to 18.

Adrian Connell : Director Norfolk YMT summed up this wonderful production :" The music is epic in its grandeur and one of the most complex scores the young members of the Norfolk YMT have had to challenge them.Once I heard and saw the piece I was hooked on it and it has proved to be one of the best pieces of musical-theatre we have undertaken in 22 years."

Jenna Donnelly is a lyricist and writer of platinum-selling records across the globe and has collaborated with artists on major labels such as Sony, Virgin and Warner. Her work also extends into prime time television, producing music for major ITV shows.Works with Ethan Lewis Maltby include;Courtenay,with Christopher Neame, an epic historical tale of bloody rebellion, the spooky, larger-than-life spectacle;Apparition Smith and Christmas show The Sparkle Thief which completed a second season of shows at Canterburys Anselm Studios in 2015. In 2016, their WW1 musical The Battle of Boat was premiered by the National Youth Music Theatre at the Rose, Kingston with a full cast-recording being released this year. 2017 sees the premiere of their new work, The Masters of Mystery as part of the Canterbury Festival supported by Arts Council England and the Marlowe Theatre.

Ethan Lewis Maltbys music has been performed internationally, he created the percussion shows Noise Ensemble and DrumChasers (narrated by Stephen Fry) and has scored for cinema, television and major sporting events including several FA Cup Finals.Works with Jenna Donnelly include; Courtenay,with Christopher Neame, an epic historical tale of bloody rebellion, the spooky, larger-than-life spectacle Apparition Smith and Christmas show The Sparkle Thief which completed a second season of shows at Canterburys Anselm Studios in 2015. In 2016, their WW1 musical The Battle of Boat was premiered by the National Youth Music Theatre at the Rose, Kingston with a full cast-recording being released this year. 2017 sees the premiere of their new work,The Masters of Mystery as part of the Canterbury Festival supported by Arts Council England and the Marlowe Theatre'.

About Us and what to expect from Thespis

Addams Family Costumes Rattonians
"Excellent costumes" Very refreshing to have such a complete service and good quality costumes.  Really made the show work.  Thank you so much!
The Rattonians
Made In Dagenham at the Adelphi Theatre
Thanks SO much for all the help with our production. The costumes are beyond fabulous! Will definitely send over some pictures after the production.

Best wishes,
Georgia
Francis Holland Sloan Square
Perins School’s production of Phantom of the Opera
Thank you so much. Here is  a testimony for you website Perins School’s production of Phantom of the Opera was a huge hit.  With the help of Thespis, our show was worthy of the West End stage! Every performance was awash with co...
Perins School
Read more...
Spring Awakening Costumes
Hi Margaret Sorry I did not catch you on Saturday night. Great feedback on the costumes and look of the show. Have loved working with you; you are now very much on our radar and look forward to working with again Many Tha...
Gallery Players Ipswich
Read more...
Addams Family

...
Carol Wibberley
Read more...
Little Shop Of Horrors
Hello Margaret! We had so many great comments and feedback on the costumes - that you sourced most of them to fit our specific cast which made such a difference and it's rare to find a costumiers that caters to that. Also that they were s...
Manchester Musical Youth
Read more...
NOGAL Productions Addams Family
"Everything brilliant" A huge pat on the back - so professional and the costumes are excellent. First time we have used "Thespis" but definitely not the last.
Sue Gallagher M.B.E
Costumes look fantastic Stage Productions
Hi Margaret, We`ve had the costume call tonight with our wardrobe team and the cast and I must say the costumes look fantastic!
Director of Stage Productions Phantom of the Opera
Director
NODA East winner Phantom of the Opera
Reviewed By: Susan DuPont NODA east NYMT production Norwich Play House "Where do I begin with this production? It was ambitious, professional, brilliantly cast and sung, innovative in staging, groupings and movement, with impressive sets cleverly used o...
Susan DuPont
Read more...
Co-op Juniors Theatre Company
The Phantom of the Opera

Review NODA Review Author: Pam White This has been a production to be seen to be believed! One of our Junior Societies taking on this masterpiece by Andrew Lloyd Webber and C...
Co-op Juniors Theatre Company
Read more...
Spring Awakening
You really are a fantastic comp...
Emil Dale Acamemy
Read more...
Made In Dagenham Costumes
Dear Margaret Just messaging to say thank you. All the costumes arrived and are absolutely perfect. I'm so impressed with the quality of the costumes and professionalism of Thespis hire. Again many thanks to you and for my mug .... What a lovely surprise, it will get lo...
Queens College Taunton
Read more...
Sister Act costumes
Hi Margaret, Hope your Sunday delivery went well, and you have caught up with some sleep. We are all very sad that the show is over!! The costumes were amazing and definitely contributed to the overall success of the production.
Janice Lim
The Addams Family NODA West
So much attention to detail NODA West Review By: Rachel Miller Newcastle Amateur Operatic Society.  Addams Family Musical.   Stoke Repertory Theatre "I was very excited to go and see Newcastle Operatic   Society’s producti...
Rachel Miller NODA
Read more...
Betty Blue Eyes Best Production Winner NODA Awards
To Margaret, Thank you for supplying us with such fantastic costumes once again. We won the NODA President's award for "best production" and attention to detail was one of the reasons mentioned-so thank you for your help with that! We look forward to deal...
Ellesmere MTC
Read more...
Sister Act NODA Review
Julie Petrucci   NODA East   CATS’ production of Sister Act The Maltings Ely The setting was used to good effect given it had to represent several different locations and the stage crew did a great job. With about seve...
CATS Sister Act NODA Review
Read more...
Daisy Pulls it off
Dear Margaret.

Charlotte E
Queens College Taunton
Sister Act one of the best. Testimonial
Thank you Margaret. Who knows, maybe one day our paths will cross again. I hope so as I do think your company is one of the best I've ever worked with and I've been doing wardrobe for over 20 years. Kind regards Jane
St Albans Musical Theatre Company
Phantom of the Opera Stage One Youth
Thank you Margaret and thank you for taking the time to compliment our cast.  We try to instil a sense of pride and professionalism in our young people and it is great to have an 'outsiders' view. Your costumes were wonderful and really helped to make our ...
Maggie Kearney
Read more...
Phantom of the Opera costumes
Shine Youth Music Theatre Phantom of the Opera costumes "Highest quality" .  Thespis is a very professional costumiers and our dealings with them have been very efficient.  The costumes are of the highest quality, and beautifully made and well maintained. We w...
Shine Youth Music Theatre
Read more...
Into The Woods
Dear Margaret,

...
Alan Johns
Read more...
Miss Saigon costumes
Dear Margaret “We were very impressed with the quality of the costumes we received.  The company had also been thorough in sending thed Regards, Sarah. Addison Ousedale school
Miss Saigon costumes
correct sizes ...
Ousedale school
Read more...
Phantom of the Opera Coventry YOG
NODA Review
Review Author: Annette Nuttall This is one of a growing number of musicals that has been released for youth and school productions only. However there is nothing simple or small about putting on this show, it is a challen...
Coventry Youth Operetta Group YOG
Read more...
Miss Saigon Costumes
The NODA Best Production Shield
NODA and the Best Production Awards. 2015 WINNER of Best Musical for Phantom of the Opera and The Addams Family 2014 WINNER of Best Youth Musical Award for Miss Saigon 2010 WINNER of Best Youth Musical &...
Adrian Connell NYMT
Read more...
Addams Family Costume Review Brighton Theatre Group
Hi Margaret, As promised I have attached a few images of the show for your use with marketing the costume set - which as I have said before were just beautifully presented and made - a real asset to the production. I will...
BrightonTG
Read more...
Lindley Players
Addams Family
Hi Margaret, Thank you so much for providing such awesome costumes. The costumes look stunning, Very impressed. I will definitely be using you for other projects in the future. Thank you again. Cheryl
Lindley Players
Hunchback of Notre Dame Costumes
Hi Margaret,

Claire J
Head of Wardrobe
<...
Colchester Operatic Society
Read more...
Beyond my expectations WW1 Uniforms
Coward or Hero Margaret, "Thank you so much for the fabulous job on the costumes....they really enhanced the show. Beyond my expectations. We have had our first performance and it was exceptionally well received" Play By Bill Snell.
Bill Snell
Addams Family Brighton
Hi Margaret, Thanks for your totally organised approach to all of this you could teach many a previous costumier a lesson in how to do it Happy weekend. Keith
Keith S
The Addams Family Costumes We were extremely impressed
Hi Margaret,
"We went to Stoke on Trent last night to see your costumes at "The Addams Family and were extremely impressed!"
Bryan Craven LIDOS