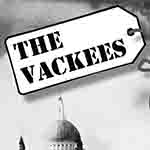 At Thespis Theatrical Costumier we have a goods selection of 1940s vintage clothing which gives the "authentic" look to your production.We can also supply the vintage military costumes. 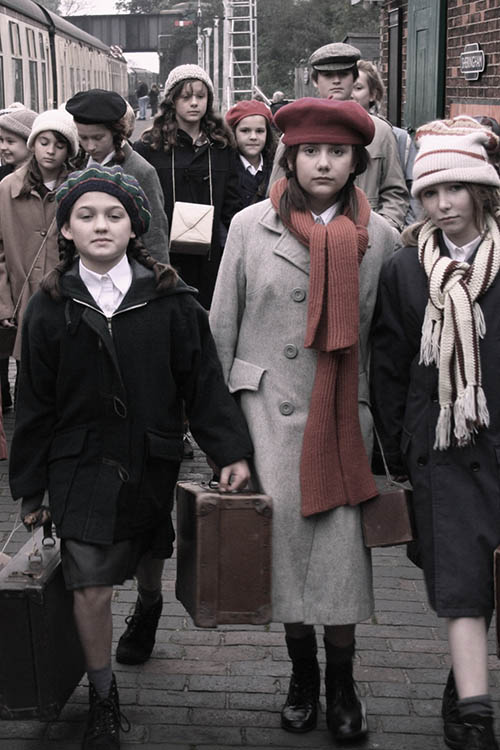 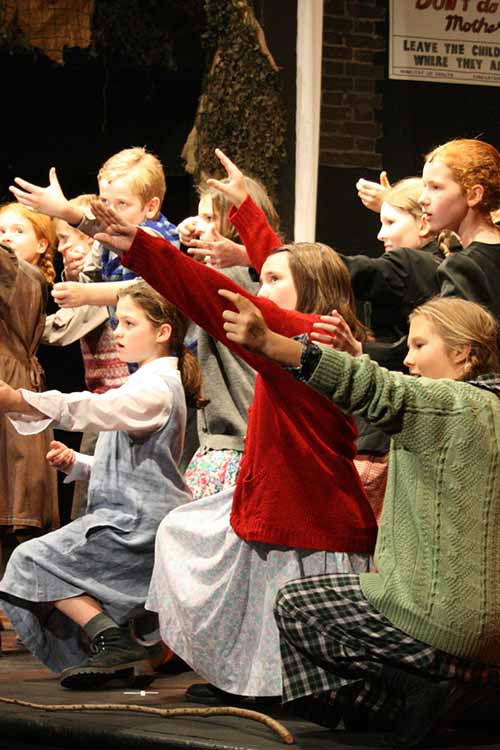 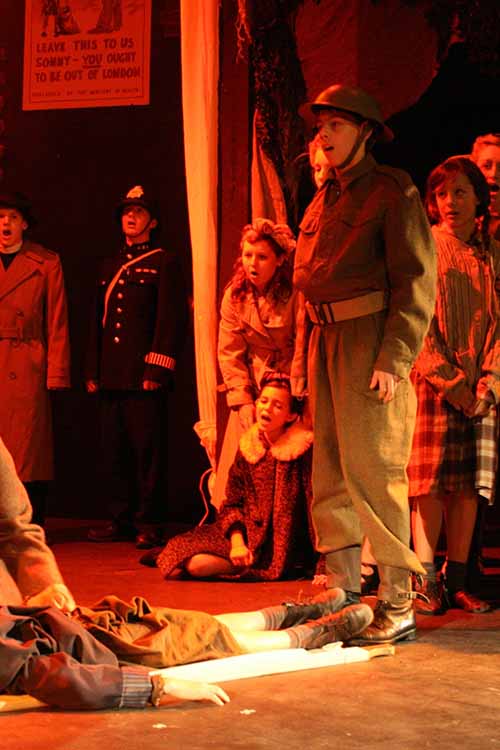 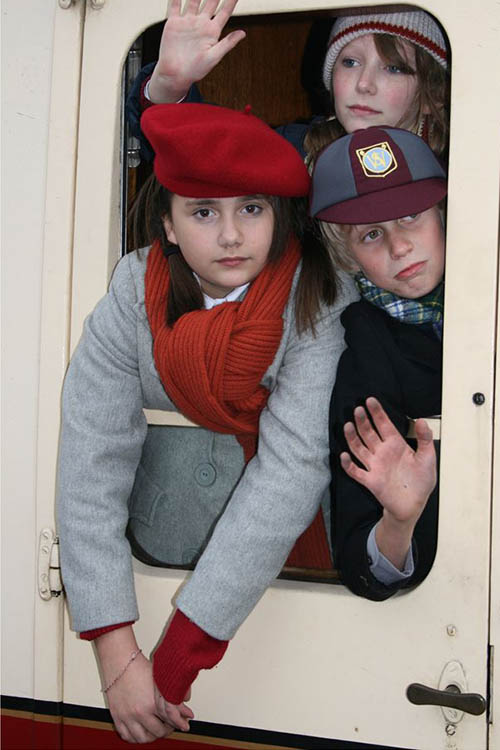 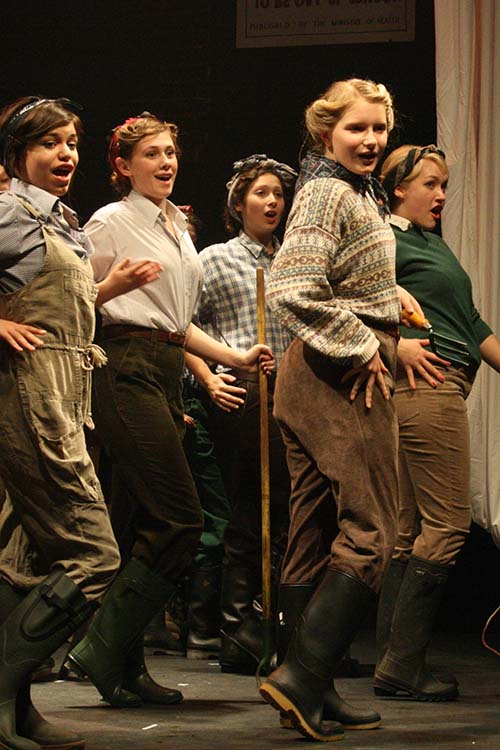 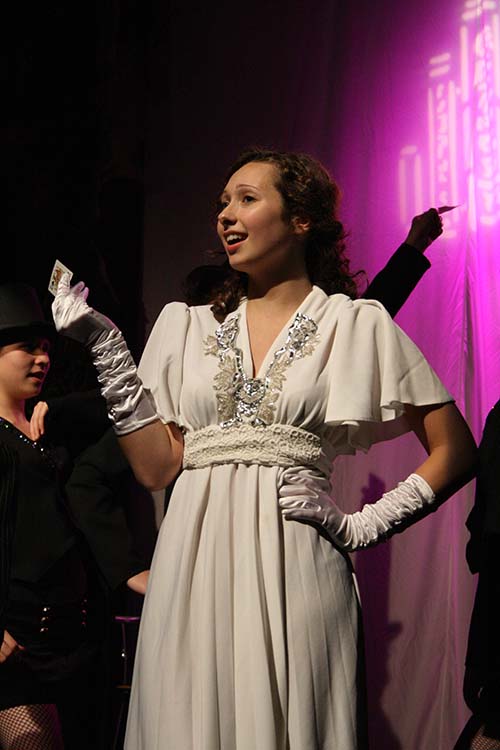 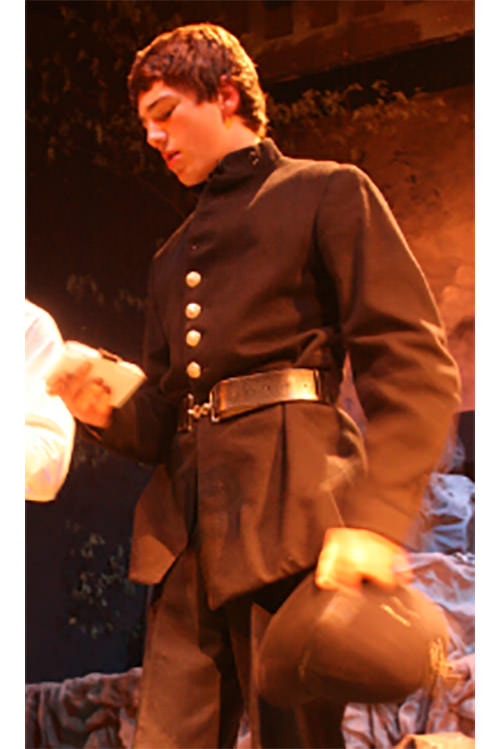 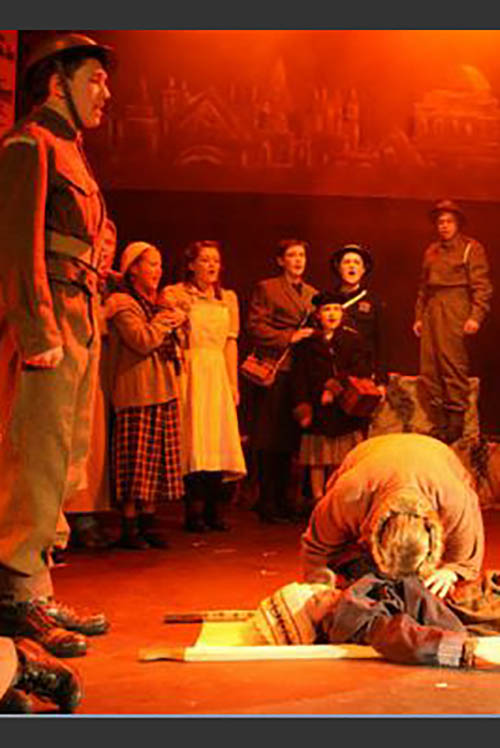 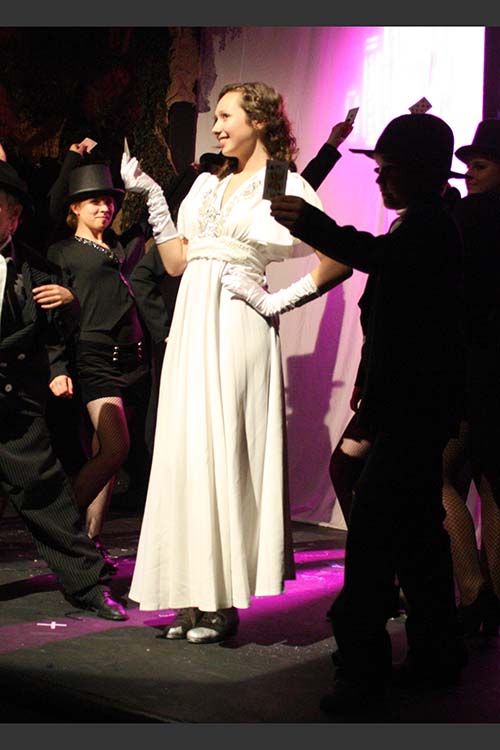 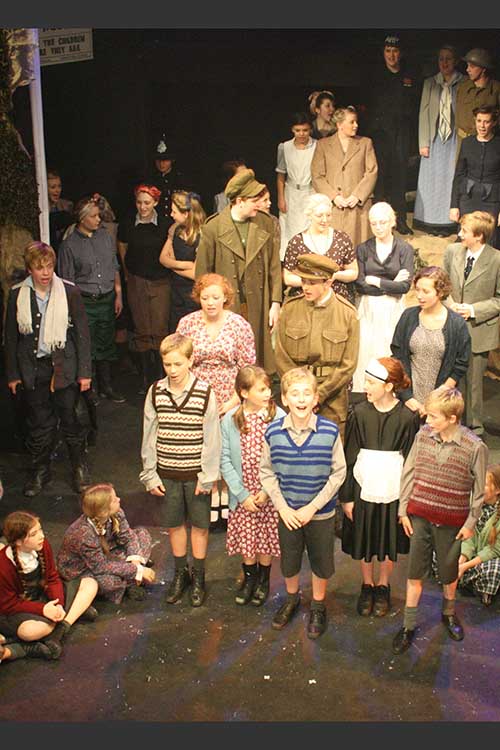 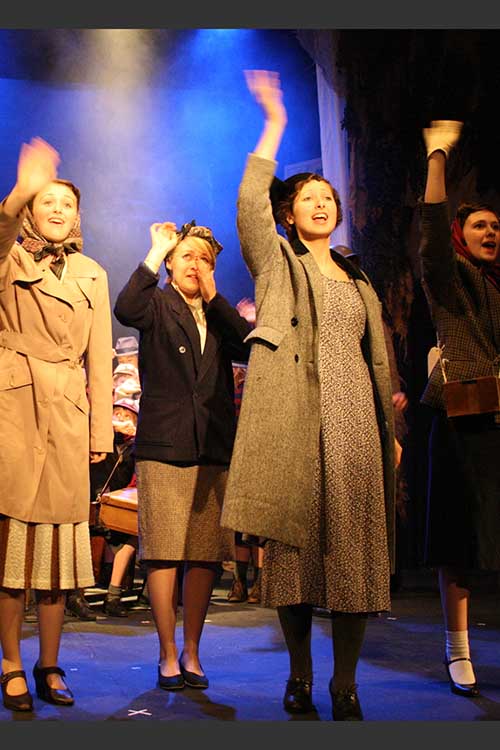 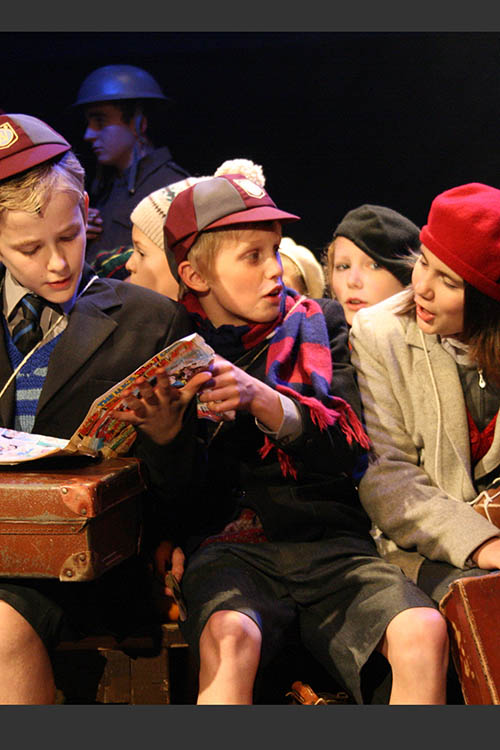 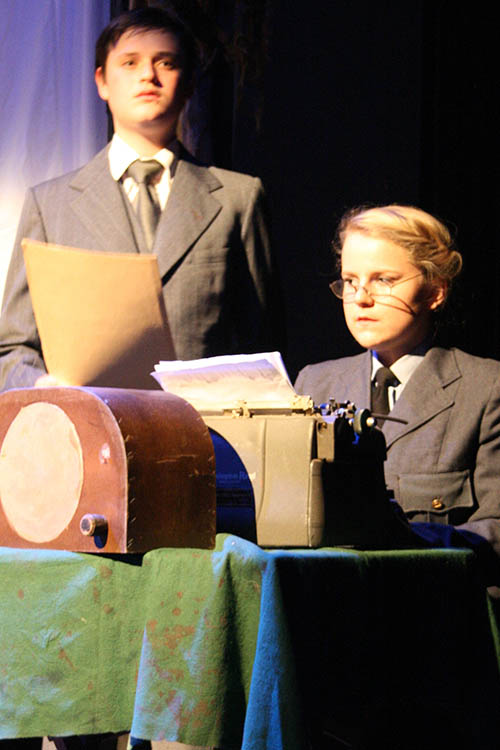 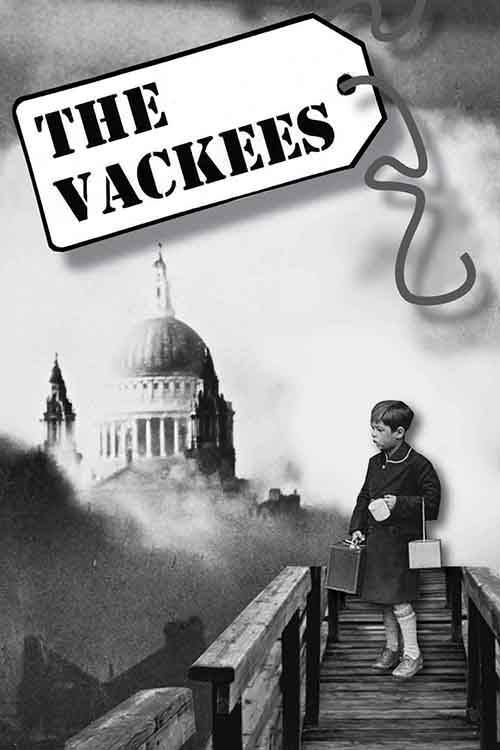 Set at the outbreak of the Second World War, this is the funny, moving story of the invasion of a Somerset village by child evacuees from London - The Vackees - and their adventures with the (at first) hostile native children. The musical centres around a young London lad, Kip, and follows his first experiences of love and war .The story unfolds with Kip saying farewell to his mother and boarding the train to an unknown destination .He and the rest of the gang are boisterous but apprehensive, and they sing "Moving on" depicting a train  journey that will lead them to Darchett.They are accompnaied by Mr Constance a teacher.On arrival at Darchett the Vackees wait to be chosen by the Somerset families who clearly were expecting a less "heathen " looking bunch but eventually all are dispersed amongst the villagers. Mr Constance , however, is left standing with the billeting officer commenting" they never said anything about teachers...". He is rescued by the local school teacher Miss Maybee and after their own initial battles over classrooms and equipment, romance blossoms. Kip ends up being billeted with Lucia Braithwaite ( "Aunt Luce" ) and shares her house with Ellen  , her niece and ward, and Grace , her 14 year old maid.Kip befriends a local eccentric called Mr Jack who teaches him about the country.After "the Battle of Darchett Hill" the relations between the gangs soften and soon it is time for Kip to return to London but he finds is rather changed!

NOGAL Productions Addams Family
"Everything brilliant" A huge pat on the back - so professional and the costumes are excellent. First time we have used "Thespis" but definitely not the last.
Sue Gallagher M.B.E
Co-op Juniors Theatre Company
The Phantom of the Opera

Review NODA Review Author: Pam White This has been a production to be seen to be believed! One of our Junior Societies taking on this masterpiece by Andrew Lloyd Webber and C...
Co-op Juniors Theatre Company
Read more...
Phantom of the Opera Coventry YOG
NODA Review
Review Author: Annette Nuttall This is one of a growing number of musicals that has been released for youth and school productions only. However there is nothing simple or small about putting on this show, it is a challen...
Coventry Youth Operetta Group YOG
Read more...
Addams Family Brighton
Hi Margaret, Thanks for your totally organised approach to all of this you could teach many a previous costumier a lesson in how to do it Happy weekend. Keith
Keith S
Perins School’s production of Phantom of the Opera
Thank you so much. Here is  a testimony for you website Perins School’s production of Phantom of the Opera was a huge hit.  With the help of Thespis, our show was worthy of the West End stage! Every performance was awash with co...
Perins School
Read more...
Addams Family Costumes Rattonians
"Excellent costumes" Very refreshing to have such a complete service and good quality costumes.  Really made the show work.  Thank you so much!
The Rattonians
Into The Woods
Dear Margaret,

Charlotte E
Queens College Taunton
Betty Blue Eyes Best Production Winner NODA Awards
To Margaret, Thank you for supplying us with such fantastic costumes once again. We won the NODA President's award for "best production" and attention to detail was one of the reasons mentioned-so thank you for your help with that! We look forward to deal...
Ellesmere MTC
Read more...
Miss Saigon Costumes
The NODA Best Production Shield
NODA and the Best Production Awards. 2015 WINNER of Best Musical for Phantom of the Opera and The Addams Family 2014 WINNER of Best Youth Musical Award for Miss Saigon 2010 WINNER of Best Youth Musical &...
Adrian Connell NYMT
Read more...
Oliver
Hi Margaret   Wow just wow! They are absolutely stunning.  We are very excited to see them on our students later this afternoon.      Thank you, just a fantastic service.    Jo
Jo @ Highworth Grammar Ashford
NODA East winner Phantom of the Opera
Reviewed By: Susan DuPont NODA east NYMT production Norwich Play House "Where do I begin with this production? It was ambitious, professional, brilliantly cast and sung, innovative in staging, groupings and movement, with impressive sets cleverly used o...
Susan DuPont
Read more...
Phantom of the Opera costumes
Shine Youth Music Theatre Phantom of the Opera costumes "Highest quality" .  Thespis is a very professional costumiers and our dealings with them have been very efficient.  The costumes are of the highest quality, and beautifully made and well maintained. We w...
Shine Youth Music Theatre
Read more...
Sister Act NODA Review
Julie Petrucci   NODA East   CATS’ production of Sister Act The Maltings Ely The setting was used to good effect given it had to represent several different locations and the stage crew did a great job. With about seve...
CATS Sister Act NODA Review
Read more...
Spring Awakening Costumes
Hi Margaret Sorry I did not catch you on Saturday night. Great feedback on the costumes and look of the show. Have loved working with you; you are now very much on our radar and look forward to working with again Many Tha...
Gallery Players Ipswich
Read more...
Sister Act one of the best. Testimonial
Thank you Margaret. Who knows, maybe one day our paths will cross again. I hope so as I do think your company is one of the best I've ever worked with and I've been doing wardrobe for over 20 years. Kind regards Jane
St Albans Musical Theatre Company
The Addams Family Costumes We were extremely impressed
Hi Margaret,
"We went to Stoke on Trent last night to see your costumes at "The Addams Family and were extremely impressed!"
Bryan Craven LIDOS
Costumes look fantastic Stage Productions
Hi Margaret, We`ve had the costume call tonight with our wardrobe team and the cast and I must say the costumes look fantastic!
Director of Stage Productions Phantom of the Opera
Director
The Addams Family NODA West
So much attention to detail NODA West Review By: Rachel Miller Newcastle Amateur Operatic Society.  Addams Family Musical.   Stoke Repertory Theatre "I was very excited to go and see Newcastle Operatic   Society’s producti...
Rachel Miller NODA
Read more...
Miss Saigon costumes
Dear Margaret “We were very impressed with the quality of the costumes we received.  The company had also been thorough in sending thed Regards, Sarah. Addison Ousedale school
Miss Saigon costumes
correct sizes ...
Ousedale school
Read more...
Made In Dagenham at the Adelphi Theatre
Thanks SO much for all the help with our production. The costumes are beyond fabulous! Will definitely send over some pictures after the production.

Best wishes,
Georgia
Francis Holland Sloan Square
Beyond my expectations WW1 Uniforms
Coward or Hero Margaret, "Thank you so much for the fabulous job on the costumes....they really enhanced the show. Beyond my expectations. We have had our first performance and it was exceptionally well received" Play By Bill Snell.
Bill Snell
Addams Family Costume Review Brighton Theatre Group
Hi Margaret, As promised I have attached a few images of the show for your use with marketing the costume set - which as I have said before were just beautifully presented and made - a real asset to the production. I will...
BrightonTG
Read more...
Spring Awakening
You really are a fantastic comp...
Emil Dale Acamemy
Read more...
Sister Act costumes
Hi Margaret, Hope your Sunday delivery went well, and you have caught up with some sleep. We are all very sad that the show is over!! The costumes were amazing and definitely contributed to the overall success of the production.
Janice Lim
Phantom of the Opera Daily Echo Review Perins School

...
Alan Johns
Read more...
Little Shop Of Horrors
Hello Margaret! We had so many great comments and feedback on the costumes - that you sourced most of them to fit our specific cast which made such a difference and it's rare to find a costumiers that caters to that. Also that they were s...
Manchester Musical Youth
Read more...
Hunchback of Notre Dame Costumes
Hi Margaret,

Claire J
Head of Wardrobe
<...
Colchester Operatic Society
Read more...
Made In Dagenham Costumes
Dear Margaret Just messaging to say thank you. All the costumes arrived and are absolutely perfect. I'm so impressed with the quality of the costumes and professionalism of Thespis hire. Again many thanks to you and for my mug .... What a lovely surprise, it will get lo...
Queens College Taunton
Read more...
Lindley Players
Addams Family
Hi Margaret, Thank you so much for providing such awesome costumes. The costumes look stunning, Very impressed. I will definitely be using you for other projects in the future. Thank you again. Cheryl
Lindley Players
Phantom of the Opera Stage One Youth
Thank you Margaret and thank you for taking the time to compliment our cast.  We try to instil a sense of pride and professionalism in our young people and it is great to have an 'outsiders' view. Your costumes were wonderful and really helped to make our ...
Maggie Kearney
Read more...
Addams Family