Your production deserves the very best when it comes to costumes, and luckily for you, you need look no further.

With over 35,000 costumes and 3500 pairs of shoes, boots, accessories (& even weapons!), we’re sure to have what you need, and we proudly remain the only costumier that includes free footwear with any hired costumes that require them.

Thespis Costumiers is an award-winning family-run business nestled in the quiet heartland of East Anglia, whose costumes have been involved in numerous award-winning productions across the length and breadth of Europe; from National theatres up in Iceland across to Tallinn and all the way down to Malta, 5-star Edinburgh Fringe shows and 5-star Mayfair Hotels, The Royal Windsor Pageant, & countless regional theatres, schools and colleges of all shapes and sizes across the UK.

We proudly offer 5-star customer service as standard with our 5-star costumes, & we costume international shows within Europe & EEA countries as standard, so there really is nowhere else to look.

We have no published price list as our shows are tailored to each individual collaboration. But don’t let that put you off, our professional service team always aims to accommodate. 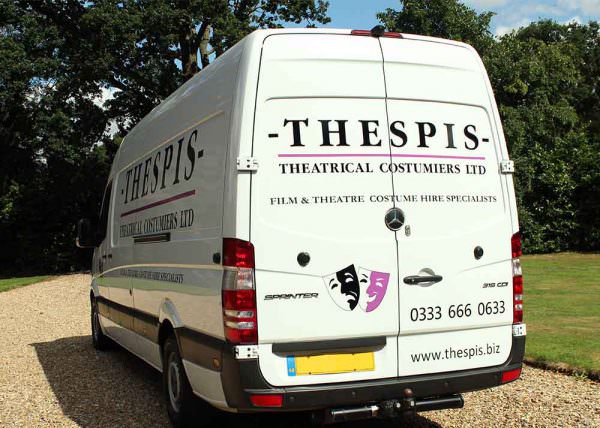 Pick up the phone and feel free to call one of our friendly team or use the contact form for your individual quote.  We promise to get back to you within 48 hours.

Specialising in costuming complete productions for professional, adult and youth theatre groups, we will make sure you get the perfect costumes for your production.

Consultation and advice with costume plots.

A real customised feel to your production as we help customise your specific package.

Tailored to each individual actor, we take the headache out of costuming, leaving you to focus on the performance! Just read the 80 or so reviews in the side panel.

The chance to visit one of our sites and work with our knowledgeable costume team who can help you find exactly what you need, who can explain limitations, benefits, etc.

A golden service delivery team who drop off your costumes in our unmistakable Thespis vans, with your costumes carefully packed in our extra-strong secure weather-proof shipping crates. No cardboard boxes from us!

Choose Thespis as your costume supplier and get access to a wealth of knowledge, experience, and foremost, care.

We are always open to work with the following:

European / EEA complete show hire available. We do hire individual costumes, but we do have a minimum hire charge of £100.00. Can't see what you're looking for? Give us a call.

Viewings by appointment to our studios only.

Beyond my expectations WW1 Uniforms
Coward or Hero Margaret, "Thank you so much for the fabulous job on the costumes....they really enhanced the show. Beyond my expectations. We have had our first performance and it was exceptionally well received" Play By Bill Snell.
Bill Snell
NODA East winner Phantom of the Opera
Reviewed By: Susan DuPont NODA east NYMT production Norwich Play House "Where do I begin with this production? It was ambitious, professional, brilliantly cast and sung, innovative in staging, groupings and movement, with impressive sets cleverly used o...
Susan DuPont
Read more...
Addams Family Costume Review Brighton Theatre Group
Hi Margaret, As promised I have attached a few images of the show for your use with marketing the costume set - which as I have said before were just beautifully presented and made - a real asset to the production. I will...
BrightonTG
Read more...
Phantom of the Opera costumes
Shine Youth Music Theatre Phantom of the Opera costumes "Highest quality" .  Thespis is a very professional costumiers and our dealings with them have been very efficient.  The costumes are of the highest quality, and beautifully made and well maintained. We w...
Shine Youth Music Theatre
Read more...
Costumes look fantastic Stage Productions
Hi Margaret, We`ve had the costume call tonight with our wardrobe team and the cast and I must say the costumes look fantastic!
Director of Stage Productions Phantom of the Opera
Director
Perins School’s production of Phantom of the Opera
Thank you so much. Here is  a testimony for you website Perins School’s production of Phantom of the Opera was a huge hit.  With the help of Thespis, our show was worthy of the West End stage! Every performance was awash with co...
Perins School
Read more...
Addams Family Costumes Rattonians
"Excellent costumes" Very refreshing to have such a complete service and good quality costumes.  Really made the show work.  Thank you so much!
The Rattonians
Made In Dagenham Costumes
Dear Margaret Just messaging to say thank you. All the costumes arrived and are absolutely perfect. I'm so impressed with the quality of the costumes and professionalism of Thespis hire. Again many thanks to you and for my mug .... What a lovely surprise, it will get lo...
Queens College Taunton
Read more...
Hunchback of Notre Dame Costumes
Hi Margaret,

Claire J
Head of Wardrobe
<...
Colchester Operatic Society
Read more...
Sister Act one of the best. Testimonial
Thank you Margaret. Who knows, maybe one day our paths will cross again. I hope so as I do think your company is one of the best I've ever worked with and I've been doing wardrobe for over 20 years. Kind regards Jane
St Albans Musical Theatre Company
Macbeth

...
Haileybury College
Read more...
Phantom of the Opera Stage One Youth
Thank you Margaret and thank you for taking the time to compliment our cast.  We try to instil a sense of pride and professionalism in our young people and it is great to have an 'outsiders' view. Your costumes were wonderful and really helped to make our ...
Maggie Kearney
Read more...
Addams Family Brighton
Hi Margaret, Thanks for your totally organised approach to all of this you could teach many a previous costumier a lesson in how to do it Happy weekend. Keith
Keith S
Spring Awakening
You really are a fantastic comp...
Emil Dale Acamemy
Read more...
The Addams Family Costumes We were extremely impressed
Hi Margaret,
"We went to Stoke on Trent last night to see your costumes at "The Addams Family and were extremely impressed!"
Bryan Craven LIDOS
Made In Dagenham at the Adelphi Theatre
Thanks SO much for all the help with our production. The costumes are beyond fabulous! Will definitely send over some pictures after the production.

Review NODA Review Author: Pam White This has been a production to be seen to be believed! One of our Junior Societies taking on this masterpiece by Andrew Lloyd Webber and C...
Co-op Juniors Theatre Company
Read more...
Miss Saigon costumes
Dear Margaret “We were very impressed with the quality of the costumes we received.  The company had also been thorough in sending thed Regards, Sarah. Addison Ousedale school
Miss Saigon costumes
correct sizes ...
Ousedale school
Read more...
Phantom of the Opera Coventry YOG
NODA Review
Review Author: Annette Nuttall This is one of a growing number of musicals that has been released for youth and school productions only. However there is nothing simple or small about putting on this show, it is a challen...
Coventry Youth Operetta Group YOG
Read more...
Miss Saigon Costumes
The NODA Best Production Shield
NODA and the Best Production Awards. 2015 WINNER of Best Musical for Phantom of the Opera and The Addams Family 2014 WINNER of Best Youth Musical Award for Miss Saigon 2010 WINNER of Best Youth Musical &...
Adrian Connell NYMT
Read more...
Sister Act costumes
Hi Margaret, Hope your Sunday delivery went well, and you have caught up with some sleep. We are all very sad that the show is over!! The costumes were amazing and definitely contributed to the overall success of the production.
Janice Lim
NOGAL Productions Addams Family
"Everything brilliant" A huge pat on the back - so professional and the costumes are excellent. First time we have used "Thespis" but definitely not the last.
Sue Gallagher M.B.E
Addams Family

...
Alan Johns
Read more...
Lindley Players
Addams Family
Hi Margaret, Thank you so much for providing such awesome costumes. The costumes look stunning, Very impressed. I will definitely be using you for other projects in the future. Thank you again. Cheryl
Lindley Players
Betty Blue Eyes Best Production Winner NODA Awards
To Margaret, Thank you for supplying us with such fantastic costumes once again. We won the NODA President's award for "best production" and attention to detail was one of the reasons mentioned-so thank you for your help with that! We look forward to deal...
Ellesmere MTC
Read more...
Spring Awakening Costumes
Hi Margaret Sorry I did not catch you on Saturday night. Great feedback on the costumes and look of the show. Have loved working with you; you are now very much on our radar and look forward to working with again Many Tha...
Gallery Players Ipswich
Read more...
Daisy Pulls it off
Dear Margaret.

Charlotte E
Queens College Taunton
Little Shop Of Horrors
Hello Margaret! We had so many great comments and feedback on the costumes - that you sourced most of them to fit our specific cast which made such a difference and it's rare to find a costumiers that caters to that. Also that they were s...
Manchester Musical Youth
Read more...